I normally only taper for one week leading into an Ironman but the truth is I normally don’t train as consistently as I have been.  I think that this might be the reason that managing fatigue, by which I mean feeling totally drained not just a little bit tired, has been a bigger issue during this lead in.  As you read last week I fell into a little bit of a hole so with wanting to make sure that I can race at the State Interclub Championships at the end of next week and still come up fresh for Ironman the week after this really was my last opportunity to put in some big sessions.

While you want to keep the focus on the big picture it’s always handy to start the week with a few key sessions or goals that you want to tick off before Sunday night.  This is especially true for those who have trained for a much longer period than I have for this one, where the pay-off always seems so far away.  Life isn’t perfect and if you judged yourself by whether everything went to plan, disappointment would be inevitable, so by setting a couple of important aims you can be sure to tick them off.  A little like the Pareto Principle though likely with a much lower hit rate.

I needed more time in the saddle and particularly spending time on the aerobars at a reasonable level of effort so knocking off another five hour session on the freeway path was a non-negotiable.  My fuelling and hydration plan is tried and tested through several races now but things can change so it was important that I include that as part of the ride.  I never judge these rides by speed or distance as weather conditions can have too great an influence, it’s just a case of riding for time. 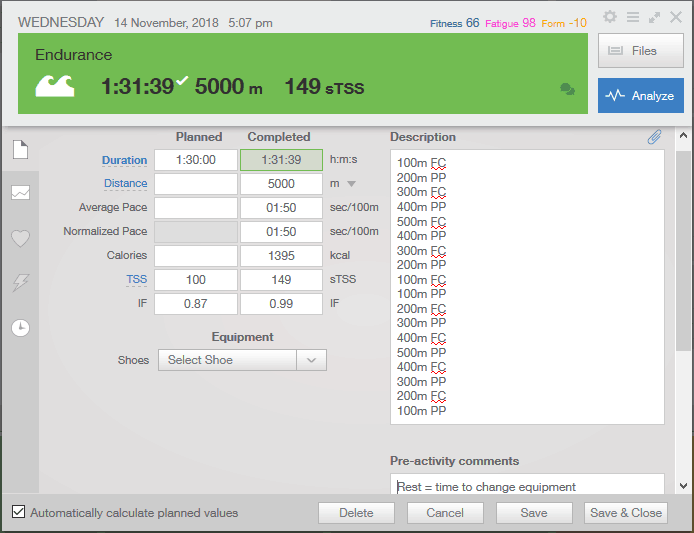 Simpler than it looks

The second key for me was a swim session that I’ve been doing for the last few Ironman races that gives me confidence and an idea of my likely race swim time.  It’s a double pyramid (well really a reverse pyramid because pyramids get smaller as you go up!) of 100, 200, 300, 400, 500, 400, 300, 200, 100 and repeat.  It’s not a straight swim though, every second rep is done with moderate sized paddles and pull buoy.  When I look at the results of this session I can pull it apart to see how a few different components of my swim fitness are at that point in time.  It might be too late to do much about it but forewarned is forearmed they say.

The training week started, as you should all know by now, with a rest day on Monday before joining the intrepid Perth Hills crew for the interval session at Woodbridge on Tuesday.  Normally when I’m coaching I like to just coach but as we had longer intervals it was a good opportunity to get my run in while also observing and encouraging them.  Wednesday was my double day for the week with a ninety minute trainer session in the morning, starting with a virtual race, and then knocking off the aforementioned 5000m swim in the evening.

I was up early on Thursday for a pure aerobic trail run, including short walk breaks where necessary to keep the effort in check, and then again on Friday to join in Coach Brian’s club swim session.  For those club members that haven’t yet made it to one of our morning swims I highly recommend it.  Lower numbers mean individual attention and you get it out of the way early making you feel smug all day.  From a coaching perspective it’s also good to get in the lanes with the athletes once in a while to see what they’re doing under the water, it’s not always easy to tell from the deck.

The weekend started pretty softly as I met Karen and Carolyn, who I am coaching to the half-ironman, at Port Beach in Fremantle for a bit of open water swim familiarisation.  Very little swimming was done by yours truly but I hope the ladies got something out of the tricks and tips I had to offer.  We probably spent more time drinking coffee afterwards and talking about the race, plans, fears, goals and the like.

Sunday was the big day this week.  Simone and I met Sam (refer last week’s Kings Park catch-up) for two and a half hours south before trying to catch the tail wind back.  The legs felt good and I gained a lot of confidence in being able to hold my aero position, at one stage not coming up off the bars for 90 minutes straight.  I’m afraid I couldn’t hold Sam’s draft though, way too strong on the bike.  I am really looking forward to seeing him live his dream in a couple of weeks, if I’m off the bike before he is done! 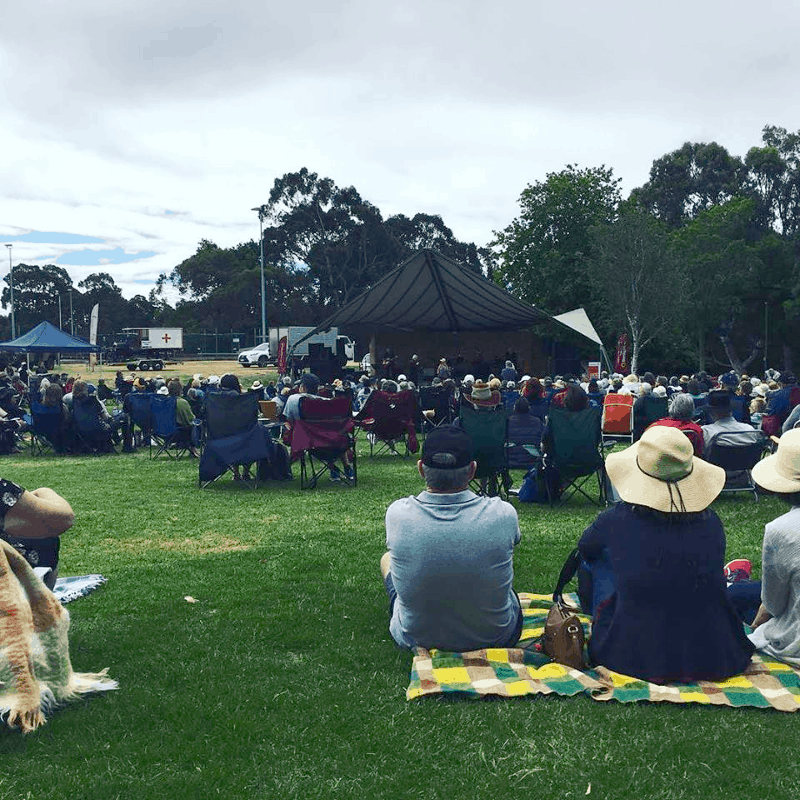 Sunday afternoon was finished off with a free concert in Kalamunda at Stirk Park where Simone and I met my parents and were entertained by Normie Rowe and Johnny Young.  Some of you around my vintage may remember Normie as the guy that took a swing at Ron Casey in front of Ray Martin on national TV many years ago but of course he was also a huge pop star back in the sixties before he was drafted into the army and sent to Vietnam.  Dad tells me (and everyone else) that Normie’s long locks of hair were pinned up on the army barber’s wall when he got his own cut as Normie had been in the intake before and they wanted to show the lads that there were no exceptions!  Of course most of us know Johnny Young from his days hosting Young Talent Time decades ago but he too had a rock and roll career before that.  I had forgotten that he grew up in Kalamunda, living in Hummerston Road (which we shall never, ever climb on a bike!)

Well this biggish week (about thirteen hours total) has left me feeling a little drained and so I’m expecting to have a light week in the lead up to the most important race of the season, the State Interclub Championships.  I always race this before Ironman.  When done at race pace it’s a relatively gentle workout and fantastic opportunity to test everything before the big dance.  As I’ve said to others numerous times before, these two weeks are 100% about getting to the race fresh, uninjured and well.  Whatever it takes.

*Continue on to week nine