Coming from a really low base this little exercise was always going to carry a risk of overtraining and this week I think that risk might have come to fruition.  Last week wasn’t huge in the context of Ironman training, only thirteen hours, but with half of that crammed into a couple of days it proved to be a bit much.  My usual Monday rest day wasn’t enough to freshen me up properly but come Tuesday I decided to just push through…big mistake.  A hard bike session on Tuesday morning with a threshold run that afternoon put me in a hole.  I needed a proper rest.

Your head messes with you a bit with this stuff.  I knew that I was doing what was best by taking a couple of days completely off mid-week but the little demons keep telling you that you’re losing fitness, undoing all the good work and just simply being lazy.  As a coach I know this is just ridiculous but when your academic self comes up against your emotional self, especially when you are a bit exhausted, the right team doesn’t always win.

If I had have been coaching myself, I would’ve given me a third day off but I just couldn’t bring myself to do it.  Instead I decided to do a tough but short session on the wind trainer to keep me mentally going and give me a little confidence, so a ramp test it was.

A ramp test is pretty simple, you start at a particular power (measured in watts using a power meter) and then you gradually ramp it up at a particular rate until you physically can’t push any more.  For me it’s over and done with in under twenty-five minutes, a better rider will take longer, but it only REALLY hurts for the last couple.  At the end of it all you get a few numbers (power and heart rate) that can be useful for monitoring progress and prescribing future training.

The results were a significant improvement on six weeks ago though a long way from where they would have been at my peak.  Still, this gives me a bit of confidence that I’m heading in the right direction and it’s not going to be a total disaster come race day.

This weekend I was on dad duties and Simone was working so opportunities to train were limited, but having already had an interrupted training week I just had to make it work.  While Leila can now ride the bike next to me when running it can be a bit of a chore so I figured the easy solution was to get my long ride in on the trainer…over three sessions in two days.  It’s not fair to go effectively missing for four or five hours leaving her to look after herself and the cumulative effect isn’t too far different.

In one of my sessions on the trainer I decided to do a virtual race on Zwift.  Basically, you sign up and start with a bunch of other people somewhere in the world on their trainers and race them.  Everyone is seeded by their ability (self-seeded mind you) and put into divisions accordingly, a bit like age-group racing in triathlon but allowing you to stand half a chance.  I seeded myself in D-grade (the lowest) and after half an hour of utter suffering came a creditable fifth.  It probably wasn’t great training for an Ironman but it reminded me that I occasionally have a bit of a competitive instinct in me. 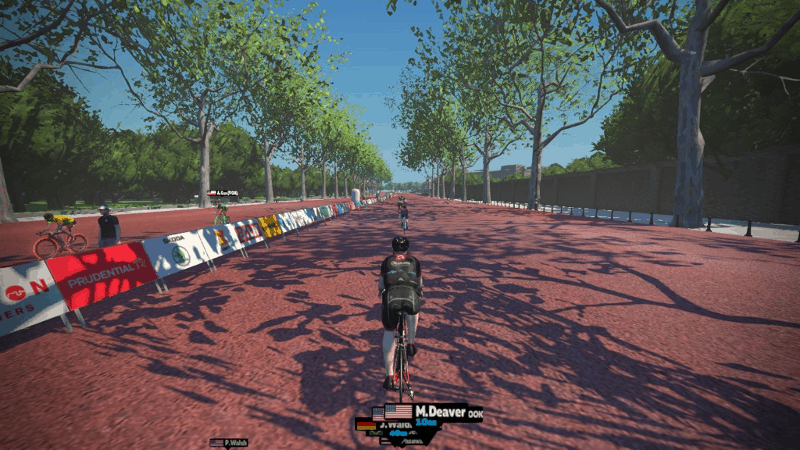 A Great Finish to The Week

Sunday morning, I finished off the third session of my long ride and noodled around for the morning doing my coaching duties and not much else.  In the afternoon I had arranged to meet a friend in Kings Park for a chat.  He has a young daughter and it was his weekend playing dad as well so it meant the kids could play together while we had a deep and meaningful conversation.

This mate is a triathlete too and has always wanted to do a full Ironman since he first saw the sport decades ago but simply hadn’t had the opportunity (or didn’t think he was ready) to tackle it.  He’s such a genuine bloke and amazing father that earlier this year a bunch of people organised a free entry and coaching for him to go around at Busselton.  He’s been incredibly diligent and dedicated but has been struggling a bit with belief in himself along the way and the enormity of the task ahead of us.

We spent maybe three or four hours, a lot of it just talking crap not in any way related to triathlon, and went from one end of the park to the other.  Hopefully the few hours we spent helped calm the sense of expectation and will ease the rest of the journey to the start line.  I know that his enthusiasm, fear and excitement helped get me in the right mindset.

I’m playing it a little bit by ear at the moment but I expect that I’ll get one last proper big ride done, a decent run and get back to the pool.  You might have noticed that I didn’t mention swimming this week.  Other than that, there isn’t a lot left to be done that can make race day a whole lot better than it already will be.  From here on it’s about maintaining the fitness while not doing anything stupid or falling back into a hole.  Of course, not doing stupid things isn’t one of my strong points…

*Continue on to week eight