We all play a number of roles in our life and if you’re not careful you can find yourself focusing too heavily on one area to the detriment of others.  This week I found myself in exactly that position and it’s only with the benefit of hindsight that I see where and how it went wrong.  Training-wise I was consistent, at least one session every day except my appointed rest day (Tuesday this week).  I was only playing dad on Monday but Leila and I had some time together in the evening and Simone was working night-shift for most of the week but I left a little later for work each morning so that we could see each other and made sure we had a little time at night before she left.  Sounds great right?  The problem is I wasn’t really there.

Goat to keep your mind on the job

Be present or be absent

Just don’t be both.  I say this a bit about training, but it’s equally true of life in general and I violated that principal badly.  What do I mean?  I guess it’s the same concept as mindfulness, whatever you’re doing make that your focus.  This week work was a constant bugbear and I spent far too much time thinking and worrying about it at times when I had no influence over what was (or would be) going on.  Consequently I’ve realised that while I wasn’t just going through the motions in the more important areas I really wasn’t doing them any justice and perhaps need to make some apologies.

Four rides (including a double ride day), three runs and one swim.  Nothing stellar and I certainly should have fit at least one more dip in the water into the schedule.  I ticked off my longest (by duration) ride since this time last year and the training totals graph looks a little more healthy.  The last few weeks accounts for more than a third of my total training since the start of last December.  Sad but true.  From here on in it’s mostly about maintaining that same consistency rather than any key sessions or milestones. 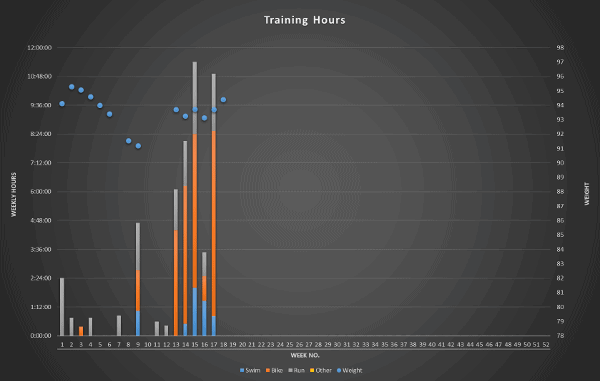 You might have spotted it if you looked closely at the graph, my weight seems to be on the rise.  While I think that focusing on weight while training is a recipe for disaster (it’s hard to do both properly) I’m also very aware that carrying a little extra can make a big difference over such a long distance.  At least some of the weight is coming from increased storage of glycogen and water which is simply a training adaptation and just using the eyeball test I don’t think my body composition has changed in any negative way.  I’ll keep an eye on it but I’m not going on any sort of starvation diet just yet (or ever.)

And a big commitment

Yes, that’s right there’s no backing out now.  This week I put the big money where my big mouth is. 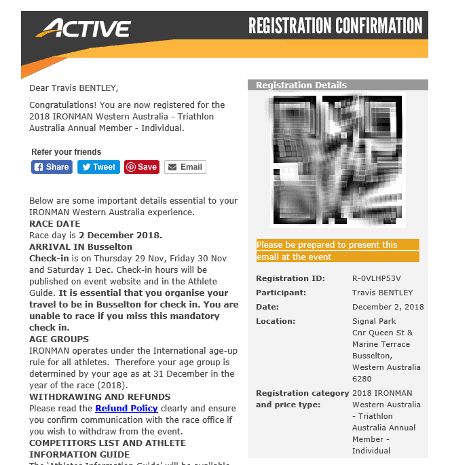 *Continue on to week five